Laplacian reconstruction of one single hologram

Holography, formed from the Greek words Holo (whole), and graphe (write), is a method of recording both the intensity and phase information of a wave-field. The digital revolution has seen the photochemical processing of conventional holography replaced with CCD arrays and high-speed numerical computation giving rise to digital holography, from which digital holographic microscopy (DHM) is derived. In digital holography the recorded hologram is subsequently reconstructed computationally by using numerical algorithms to provide direct access to both the amplitude and phase information of the object. We are working on developing novel digital holographic microscopic systems as well as efficient numerical methods to enhance phase accuray, improve spatial resolution and compensate optical abberations 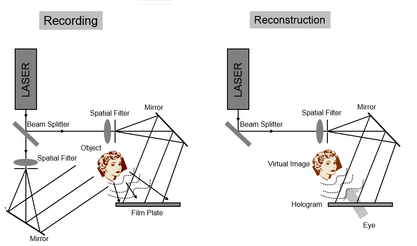 Holography, invented in 1947 by the Hungarian physicist Dennis Gabor, is a two-step imaging technique comprises the successful combination of interferences and diffraction. The interferences encode the amplitude and the phase information of the object wave simultaneously and the diffraction acts as a decoder which reconstructs a wave which seems to be formed from the previously illuminated object. As the etymology of the word ‘holography' suggests, a hologram contains all the necessary information of the object, holography has been widely applied in optical metrology since not only the intensity but also the optical phase and therefore the depth and contours of the object can be recovered. However, the cumbersome procedures and stringent requirements on equipment in traditional holography such as the use of photographic plates for recording, wet chemical treatment, and physically illuminating, significantly restricted its practical applications. 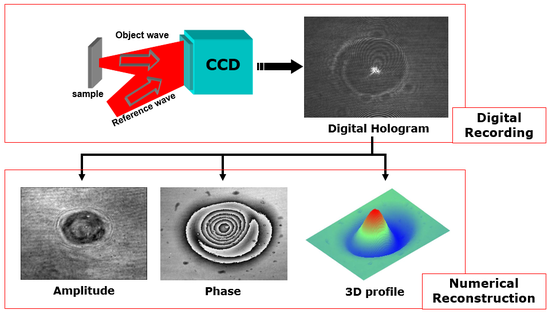 The idea of “digital holography” that to replace the analogue recording/decoding of the object with a digital recording/decoding process simulating a diffraction from the recorded image now has become a reality . In comparison with traditional holography, the main advantages of digital holography is that the hologram can be directly recorded by a digital imaging device, making chemical processing unnecessary. Besides, the intensity as well as phase information of a holographically stored wavefront can be retrieved directly and quantitatively through the numerical reconstruction process realized by a computer. Generally, the DH technique can be divided into two parts: digital recording and numerical reconstruction. In the digital recording process, a “digital hologram” of the object is recorded using different optical configurations onto a CCD or other digital recording devices while during the numerical reconstruction process, the phase and amplitude information of the object is carried out by the digital simulation of wave diffraction in the “digital hologram”. The capability of while field information storage in a hologram and the use of computer technology for fast data processing offer more flexibility in experimental configuration and significantly increase the speed of the experimental process, opening up a lot of possibilities to develop digital holography as a novel metrological tool. 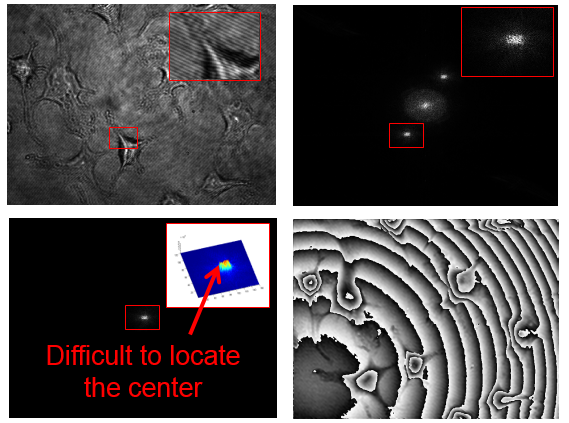 A novel numerical algorithm is proposed to reconstruct the Laplacian of an object field from one single in-line hologram. This method uses two different reconstruction distances, or two different reconstruction wavelengths to reconstruct one digital in-line hologram. Theoretical analysis shows that when the value of difference is sufficiently small, the difference of the two reconstructed fields is an approximation to the second-order Laplacian differentiation of the object wave, and the zero-order and “twin-image” noise can be almost eliminated simultaneously. Computer numerical simulations and optical experiments are carried out to validate the effectiveness of this algorithm.